At Flamingos Guest House we teamed up with five other travelers and shared a shuttle from Stone Town to the east coast beach Paje. The drive took an hour (10,000 shillings) through beautiful countryside passing mango and papaya trees. I am now obsessed with papaya trees. They are skinny tall trees with the leaves and fruit at the tipy top. 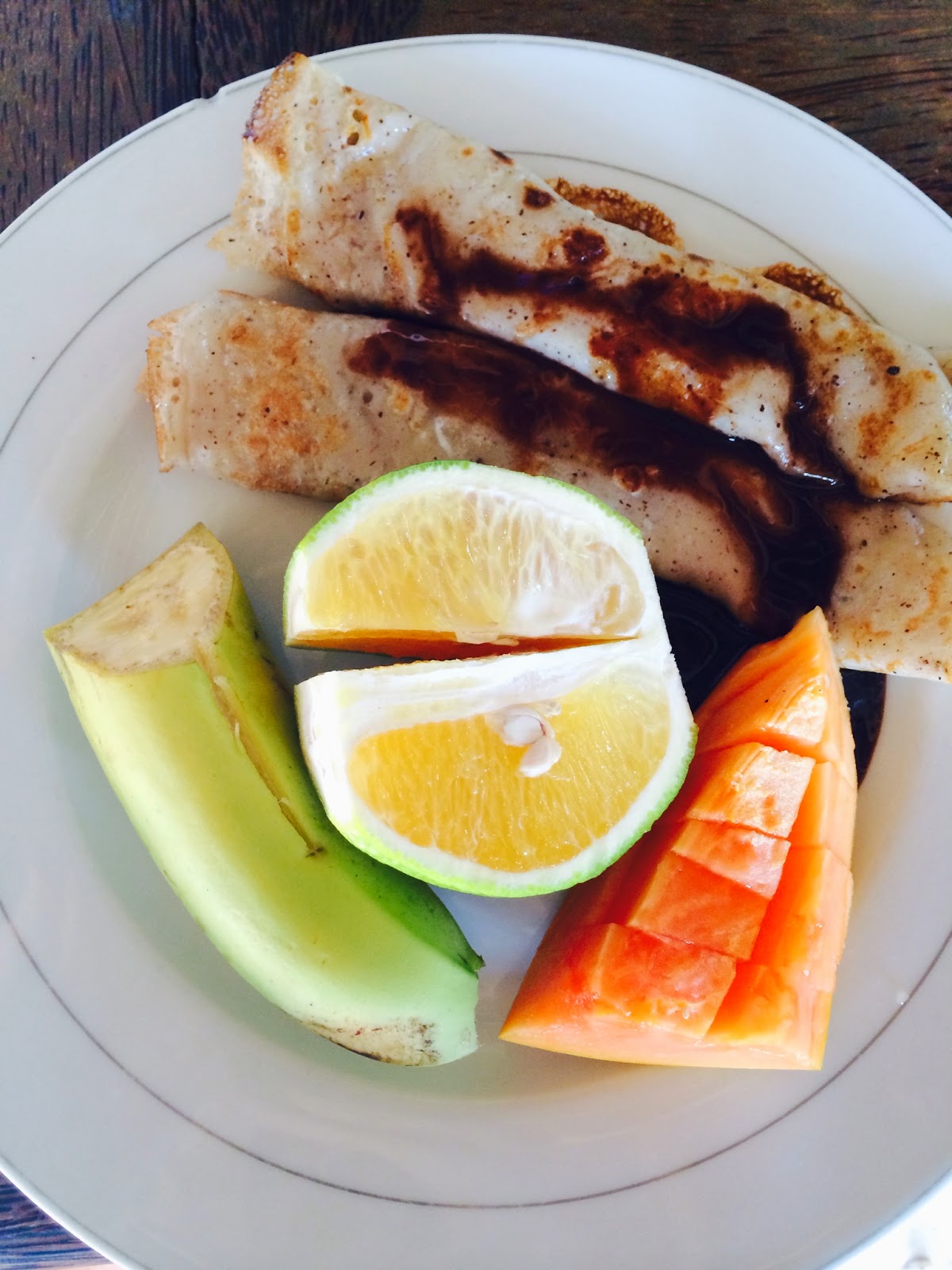 My mom, Fanny (Norway) and I checked into New Teddy's Place and beach life. My mom and I made our way down the sandy pathway pass the volleyball court and kittens to our private bungalow and Fanny made her way to the dorm. All the bungalows have sand floors which at first sounded exotic but then I realized I would constantly have sand in my bed, but fortunately it wasn't as big of an issue as I had expected. New Teddy's Place is advertised as a no sleep party hostel but for us it was a peaceful oasis Sunday and Monday night. The bartenders were also friendly local guys who we enjoyed talking to over breakfast and dinner. Breakfast was definitely something to wake up for - pancakes (crepes) with chocolate sauce, fruit and juice. 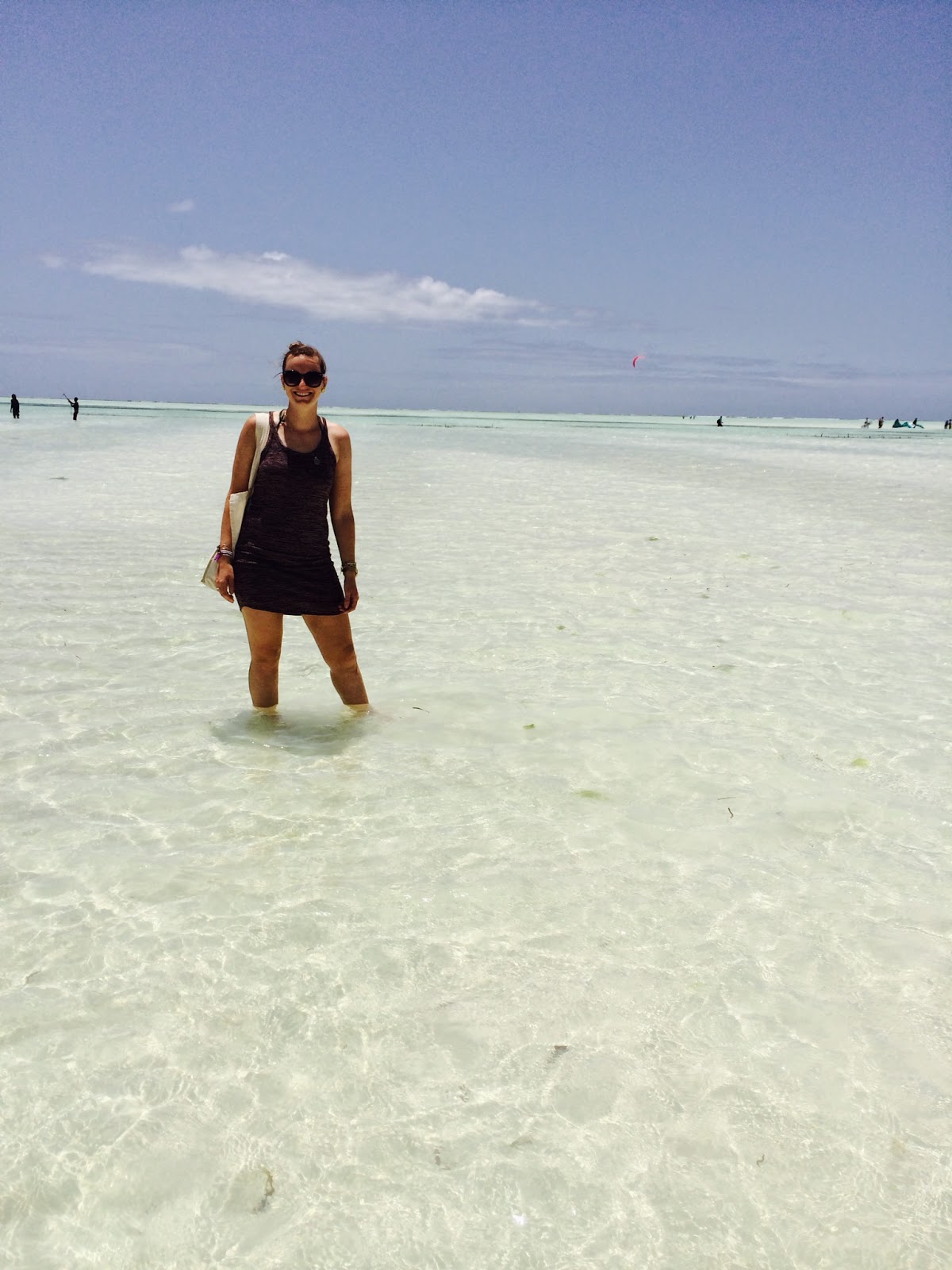 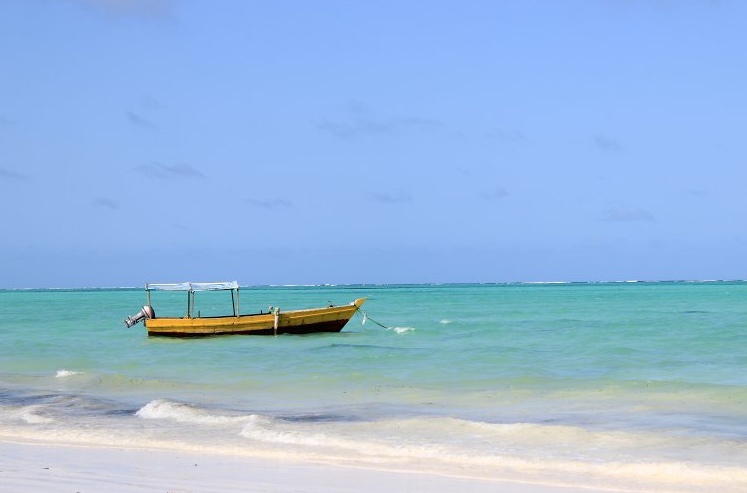 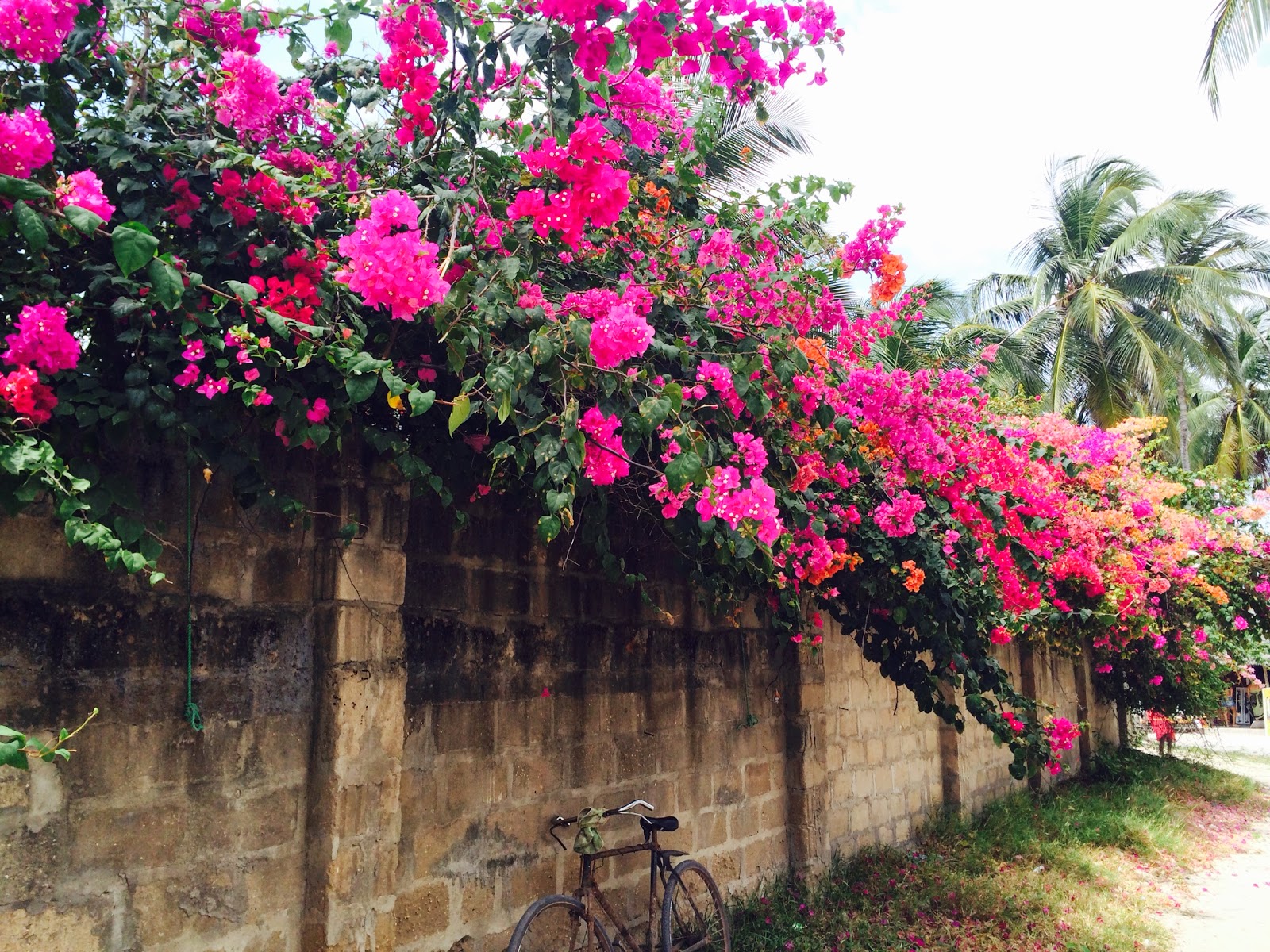 After we had settled into our bungalows we walked down the sandy path to the beach and WOW! It was the most stunning view I had ever seen. Paje has a very shallow beach so the water is a soft turquoise and when the tide is out you can walk in ankle deep water for hundreds of feet. I think I have way to many photos of the turquoise water but I couldn't get enough. There were also cows on the beach, Massai walking with their sticks, women collecting seaweed and children working on the days catch. Lots happening. The weather was also perfect. It was sunny and hot but since there was a strong breeze on the beach it was very comfortable. In the evenings it would cool down to a comfortable temperature. 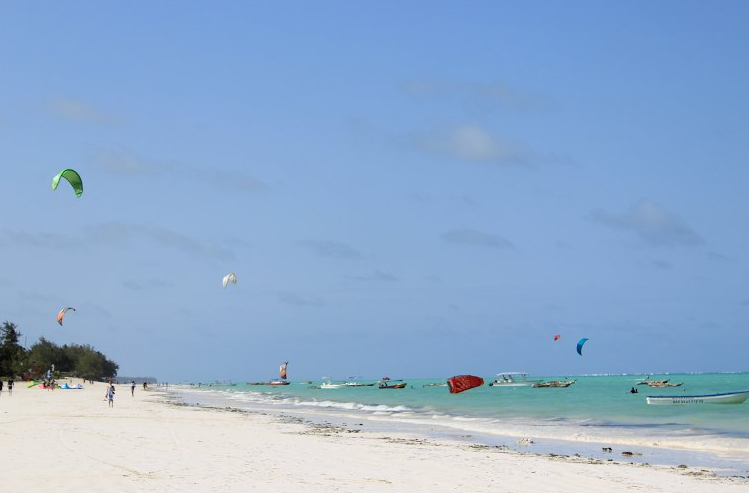 In the main area of Paje beach there was a strip of modest hotels set back from the beach and a few different restaurants. There was not really a town besides a few shops inland, everything was on the beach. Also as it turns out Paje was a huge beginner kite boarding beach, however, for the pros we heard the wind was not consistently strong enough. The kites added a colorful touch to the turquoise water but they would occasionally dive bomb in front of you. Beginners. 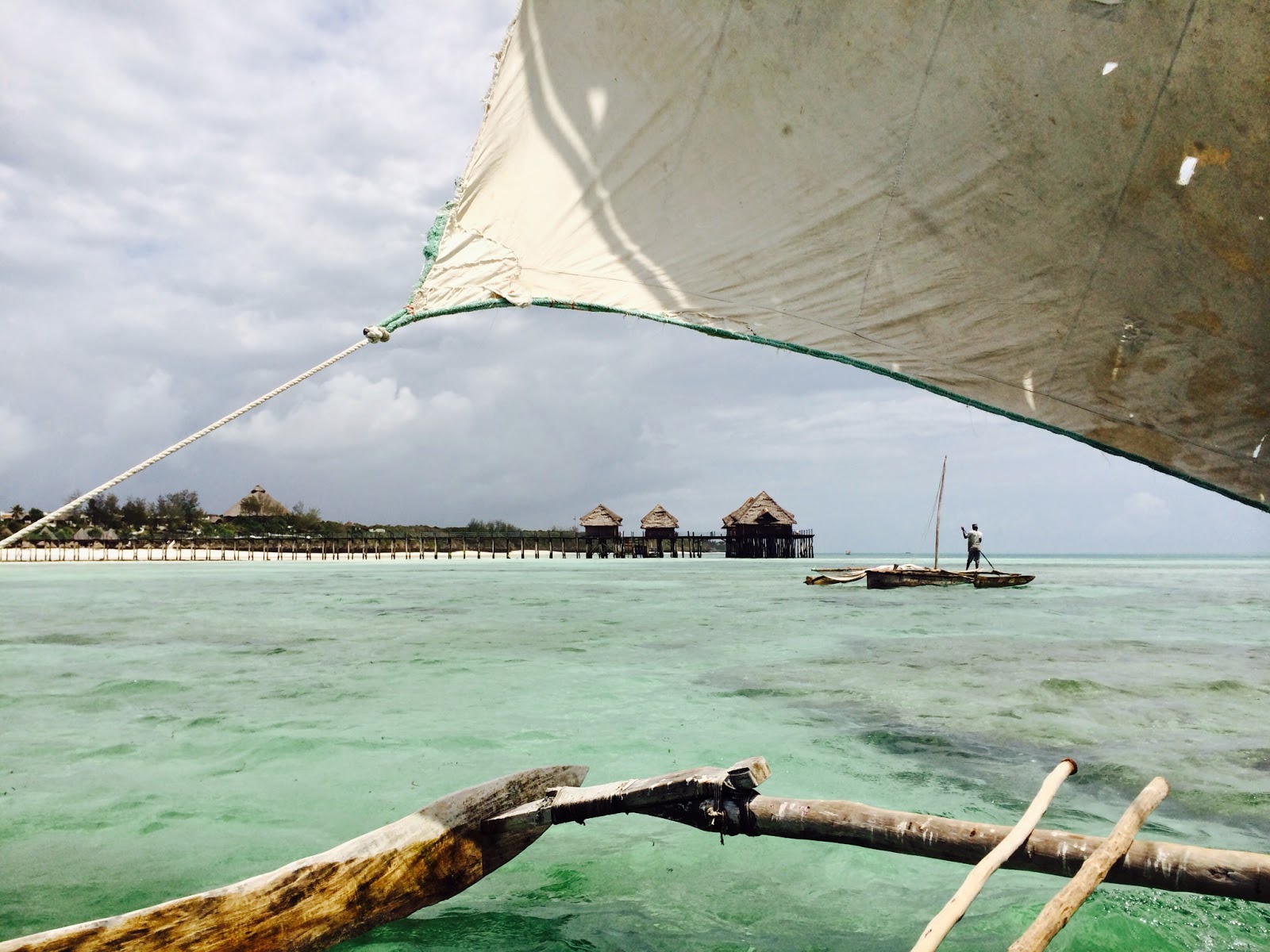 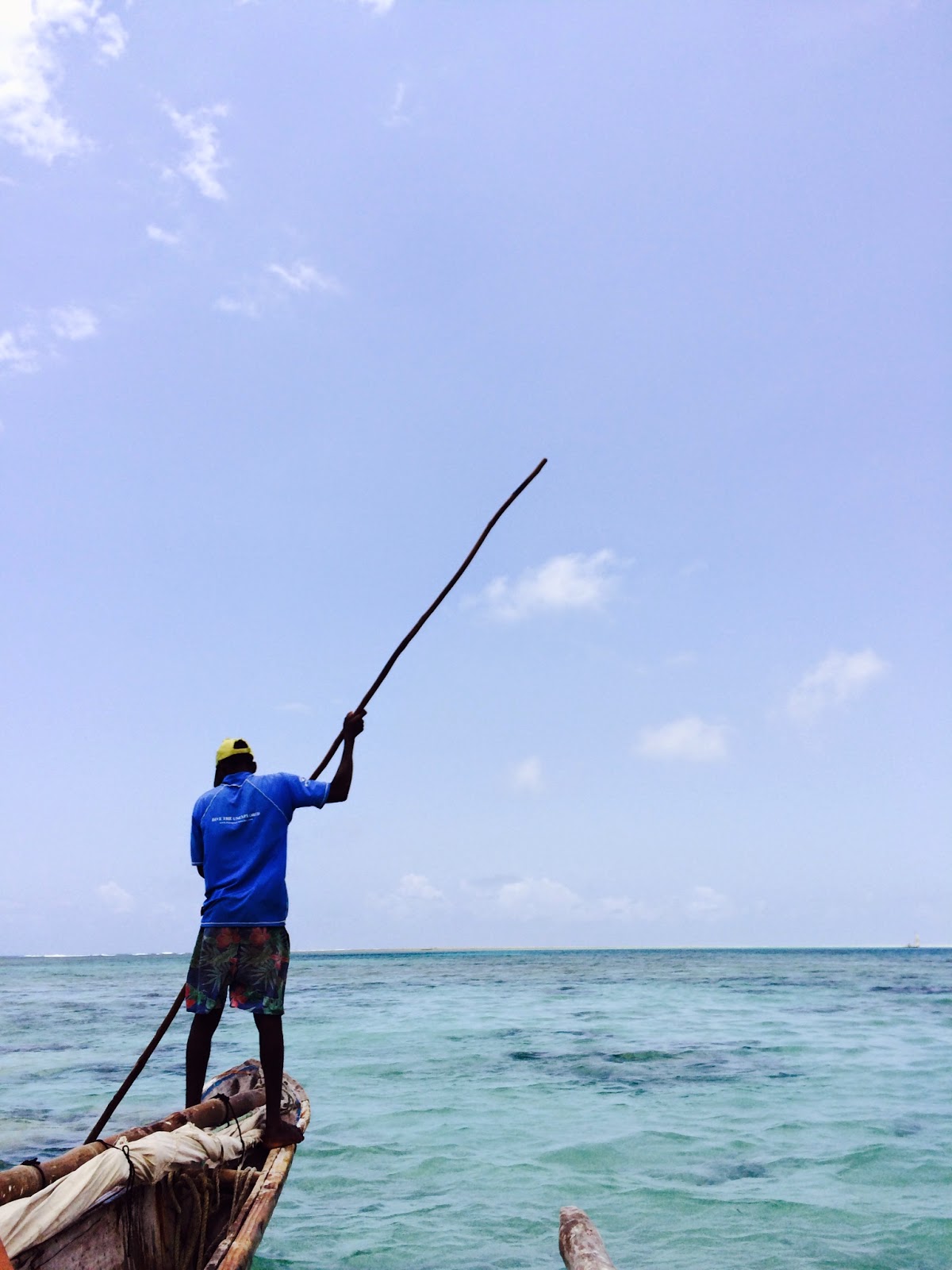 On our second day Fanny, David (Australia), my mom and I organized a snorkel trip to the Blue Lagoon that included a stop at The Rock. Originally we were suppose to take a powerboat to the Blue Lagoon but to our surprise we showed up to a dhow (pronounced dow)! Our guide saw this as a disadvantage but we saw this as a huge bonus. Little did he know he could have raised the price of the snorkel trip at this point ;). The dhow that we sailed was unlike anything I had seen before. It was a trimaran and the center haul looked to be one piece of wood carved out so we stood or sat along the edge in a single file line. There was a man standing in the back steering and a man standing in the front controlling the sail. The sail was a huge piece of cloth (with holes) that raised similar to a Sunfish sail. I am not sure if this is true for all dhows but we were only able to sail downwind. The guys used poles to push us up wind after we snorkeled.

The snorkeling was fantastic. The coral was in good shape and there was no lack of colorful fish. Usually I have to chase the colorful fish when snorkeling but this time they were chasing me. There were yellow fish, zebra striped fish, rainbow fish, black fish, angle fish, little fish and the list goes on. 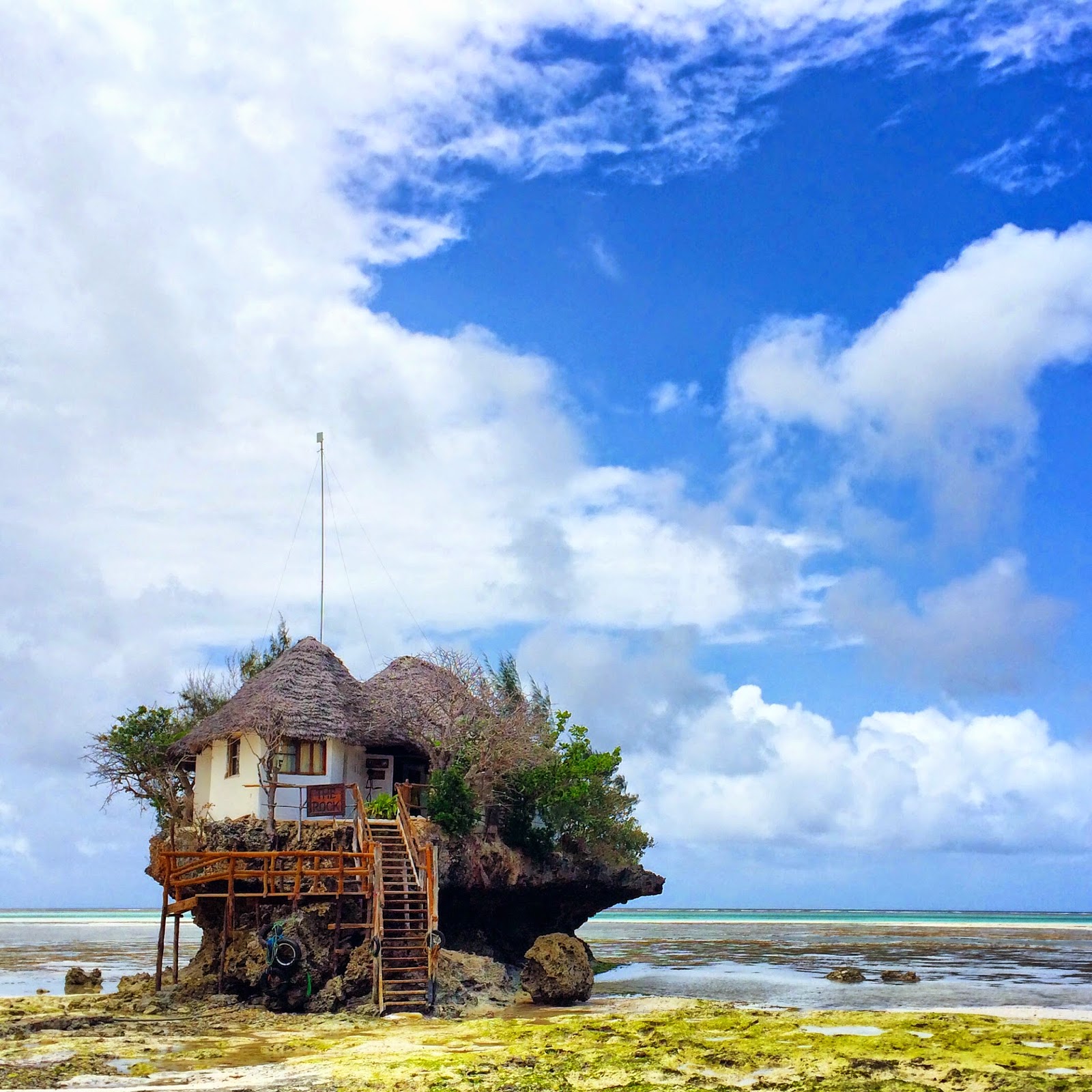 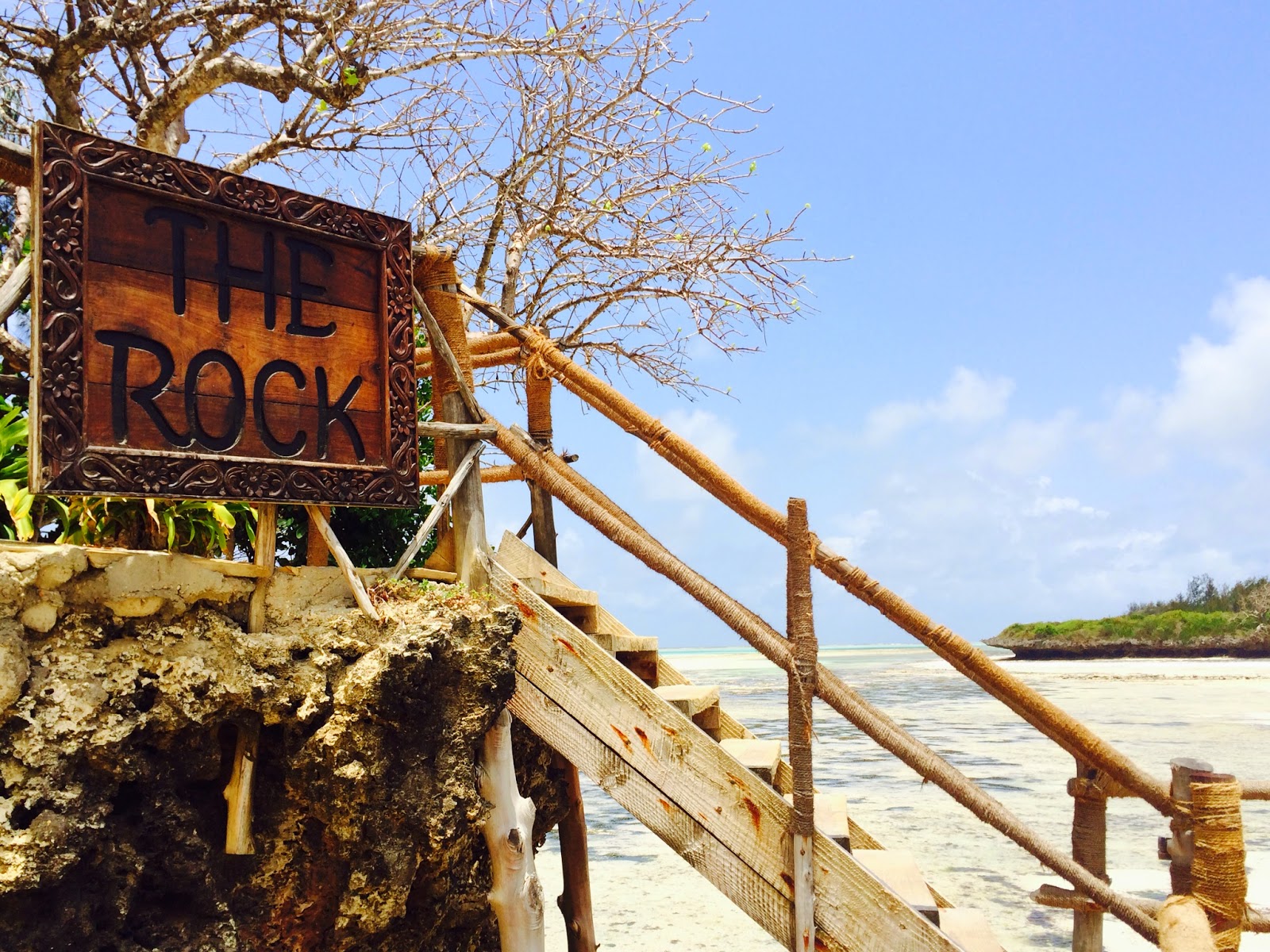 Once our fingers were pruned from the warm salt water we climbed into the dhow and made our way back to the beach to drive to The Rock. Before I arrived in Africa I saw The Rock listed somewhere online as a restaurant with one of the best views in the world. When I read that it was on Zanzibar and was on a rock in the ocean (at high tide) I had to go. The Rock did not disappoint, I was thrilled to just be in its presences. My mom and I went in to have a bitter lemon (bitter lemon is our favorite non-alcoholic drink in Tanzania).