Ecuador: Baños, not the bathroom

The night before we were going to leave for the coast we talked to a fellow dormmate at The Secret Garden and she mentioned Baños. The next day Laura, two Swedish guys and I went to Baños. Before we hopped in a taxi to the South bus terminal we watched the filming of a tv commercial that was outside our hostel door- got to see a local celebrity :). After we were board out of our minds watching Ecuadorian acting we headed off to the bus.


Baños is about three hours south of Quito, an outdoor activity town that has the look/feel of being in the Swiss Alpes. There were Italian restaurants on every street and mountains every direction. We stayed at Hostel Plantas y Blanco and their was an avocado tree outside our window so with a little team work we were able to pick one! Baños also offers an eating adventure... ginny pig (cuy). Tastes like chicken. The Swedish guys ordered one, Laura and I just had a bite.


The following day the four of us rented ATV's and took off to drive the roads of Ecuador  but it wasn't that easy. Laura and I shared an ATV and thank god we did. We plan was to switch drivers so one could photograph while the other drove. Laura was first to drive and it ended quickly as she almost ran over a dog and drove up on the curb as the locals started yelling "dangerous, dangerous." The polica had to come over and pull us off the curb. At this point I took over and Laura became the photographer. As the four of us headed up the mountain we quickly learned that our ATV was much slower with the two us on it. Within thirty minutes we had lost the Swedes and were on our own for a major adventure- we went through a tunnel with no lights and a huge truck behind us, Laura pulled us  to reverse when we hit a dead end, and we stopped for fresh squeezed orange juice in a little town. It was awesome. That afternoon the Swedes brought us fruit for ditching us. That same evening we sat on the roof top terrace and played cards as this was our last night with Max and Wiktor (pronounced Victor). 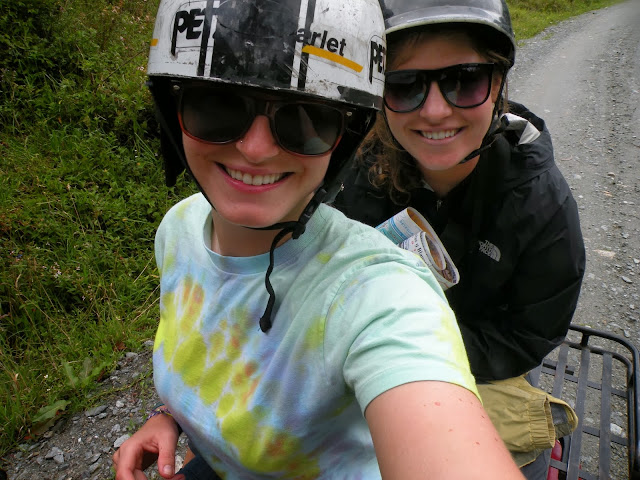